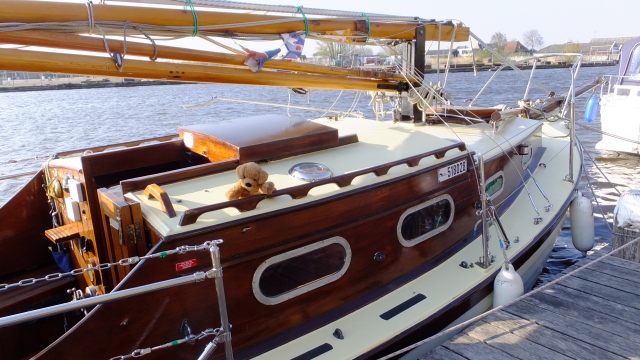 fell into the bilges yesterday and sustained a wet bottom. I’m happy to report that a spell on deck in the sunshine has restored him and his nether regions, to full, functioning capacity. For the uninitiated, the bilges are the space in between the floorboards and the bottom of the boat, where anything you drop ends up. This includes the vast amount of rain which fell on Lady Christina before we arrived and could put the covers on, or switch on the bilge pumps. I spent a fair amount of time mopping up this illustration of the Water Cycle in action.

So we’re back on board and ready for the 2019 Brexit-or-not? Boating Season.

You might wonder why I write these posts. I could say it’s to inform and educate my readership about the perils and delights of living on a small boat in a delightful country. Or that
it’s something to occupy myself with, living in these primitive conditions, without TV, a shower or a fridge. Maybe both of these, but it’s also a way of removing the stuff which is going through my mind anyway, so there’s space for further thoughts.

I’m thinking about how travel helps me to understand who I am, what I want and where I belong. I can’t decide whether I like moving or stopping the best. Travelling under sail or iron sail (engine) is important, but the places where we stop influence what we do, what we eat, whether we can shower, shop or touch dry land and whether we are alone or part of a temporary community. And in the same way that all the languages on earth explains and shape their culture, so too, the many nautical terms have a specific meaning and significance. So we don’t ‘stop’ we ‘moor’.If a boat stays in one place for a long time, it’s described as ‘lying’. We don’t ‘leave’ a mooring,we ‘slip’ it. The things which fasten us to dry land are called ‘lines’ and we ‘put out more of them’ in stormy weather. And so on.

There’s a lot to do, settling into the boat which will be our home for much of the next six months. We’re not going to have a ‘white-knuckle sailing and dinner in the pub’ experience, so we have to unpack books, materials for art and craft as well as coffee beans and refurbished pillows. We really live on this boat – rather than just exist on it. Part of the joy of starting this season is re-discovering ‘all the things’ already on and part of the boat. A Zassenhaus hand coffee grinder, folding digital scales, scented candles and a diesel powered hot air heating system. These last two things necessary for coping with the water ingress mentioned earlier. The carpet got wet and it smells! All these things have to be stored properly, otherwise we’d be constantly falling over them and getting bad tempered. So everything is ship-shape’ and I’ve already mislaid my watercolour painting pad. And there’ve been many ‘behold – the mustard pot’ moments, during the day. (see Kenneth Graham’s ‘The Wind in The Willows’)
There’s also: refilling the chemical toilet, reconnecting the gas, batteries, checking that the engine works, installing the new spice rack and miving the coffee filter holder, not to mention putting up the mast. That’s tomorrow’s job.

I discovered that a little marmalade,( brought from home), goes a long way, It was smeared all over the inside and outside of the food box. Not something I expected when the box had only been in the spare bedroom at home, More the sort of ‘high seas’ accident. I must reassure you however, that we don’t go anywhere near the ‘high seas’, although I can make sailing along canals, rivers and across meres in The NL a veritable sea voyage in my head. After all, as a child I had my own desert island – a spoil heap left after someone built two garages, which was then appropriated by grass, dandelions and a variety of arthropods – my own ‘Croc Island’ .

Unpacking the library always takes time and the selection of titles for this year is perhaps to remind us that others have it worse: ‘Shackleton: the heart of the Antarctic and South’, ‘ Everest 1953: the epic story of the first ascent’, Jeremy Paxtons’ ‘Great Britain’s Great War’ and Neil Oliver’s ‘A History of Ancient Britain.’ They put our 21st century problem of not having a good internet connection into some sort of perspective.

So, as we settle in, with the Red Duster flapping – and this isn’t an affectation by the way – but shows we are in residence and also that we are from the UK – a huge dredger is going past, showing that life and work on the water is happening all around us. We look forward to many and varied days here in Friesland Province in the north of The NL.