It’s not all gravy

Europe!  Y’know – that big place that the UK are running away from….

When I tell people we are living on our boat in The NL, travelling to embrace the culture, meet the people, attempt to understand the language and shop in Jumbo, they might imagine us gently cruising along canals, down streets lined with gabled houses, dropping into bars and cafes for coffee and beers, all the while wearing straw hats, shorts and flip-flops.

And sometimes it is like that (although not the flip-flops). Here. for example is the ‘control room’ always active while we’re travelling, with a chart plotter running, laptop as belt-and-braces,  a paper chart for seeing the bigger picture and always handy, binoculars,  the Dutch/English dictionary and European Waterways Rulebook.

We are in Arnhem at the moment, which is on the Rhine -a very big river. So big, in fact, that the water can work itself up into breaking waves, if the wind’s strong enough. So big that 3 or 4 thousand ton barges travel along it.  And if the Lock Keeper says you can go into  the lock chamber, you go – even if it means you’re next to one of the monster barges.

Incidentally, the Lock Keeper is often female. As are the Bridge Operators. I expect there are women in command of the many ferries too.  We set off to travel down the Rhine at 6:30am on Friday, so early and a bit murky, that it was wise to have our navigation lights on. Proper sailors! 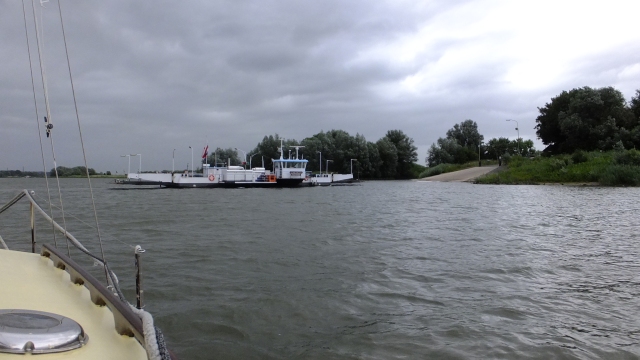 Arnhem is of course famous for Operation Market Garden during WW2. I’ve seen the film, but it’s a different matter altogether to stand and look at the Robert Frost bridge, see its original pillars, onto which the new bridge was built, look at the photos of houses reduced to rubble and later visit the Open Air museum, where over 600 people, evacuated from Arnhem, sought refuge and lived a safer life for a while.

There can be a tendency in the UK to think WW2 was our business, but we weren’t invaded and  we didn’t have a winter of hunger as they did here. It’s ironic that after the war, when the bridge was rebuilt, they used British steel. ‘Everyone in Europe co-operated with each other to get things sorted out,’ said the man in the museum.

How things are changing.