Motored to Joure yesterday- it’s the other side of the Sneekamer. Our final voyage last year was across the Sneekemer-some of you have seen the video clip of us being bumped and splashed in a Force 5. The forecast was for Force 3 until 11am, then Force 4 and rising to Force 5 by 3pm. Understandably, I was keen to get there asap.

It was a beautiful morning with flat calm water when I got up, but being on a boat is a bit like having small children- in takes ages to ‘get out of the door’. The parents among you might remember arriving at afternoon events as they were winding up. Our excuse on the boat is that there’s so much to do. Living in a small space means you have to be tidy, so the washing up gets done and bedding put away before we set off. We also had to bring the folding bikes back on board, do all the pre-flight checks and then we thought we were ready, but no! Still connected to the electricity supply. We also had to call in at the Chemical toilet disposal point en route and – well- dispose of the Chemical toilet.

Lots of ‘firsts’ today. The rail bridge didn’t open even after three trains had gone through so I called the bridge-keeper on VHF. He obviously hadn’t seen us waiting! I think it was the same at the road bridge, so we had to give the signal for ‘please open the bridge’ on out horn: one short blast sandwiched between two long ones: if you write it in Morse code it’s dash-dot-dash which looks like a bridge. Geddit?

Another first was seeing the Common Cranes,building their nests and a more worrying one was not being able to see the red triangle navigation mark which showed us where to turn off the meer. 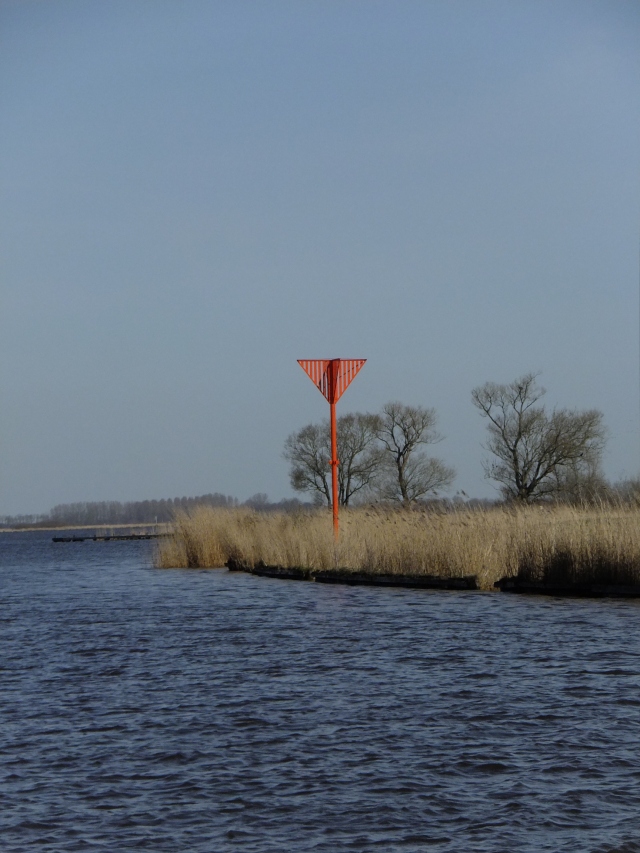 These marks are more than useful because on a huge meer you can become very disorientated and can’t sort out which bit of land is which. We knew where we were because of the chart and compass, but it is useful if you can see the mark as extra confirmation. But it wasn’t there! Maybe damaged by winter storms?

The islands on the meer were demonstrating one of the effects of global warming, by being so waterlogged that large areas of them were under water. Places where I walked last year just weren’t visible.

Anyway, we got to Joure without incident and the smell of roasting coffee from the Douwe Egbert factory confirmed our safe arrival. Everyone says it’s forecast to be 20 degrees tomorrow. I’ll let you know.